Trying to escape a horrific past, Shyla has immersed herself in life as a tough cop in the bustle of LA. When the case of a lifetime takes her back to her hometown of Redding, she is thrown into a world of organized crime, deceit, and bitter reminders of her childhood.

As Shyla’s path crosses that of Brennan, a troubled sidekick to the ringleader she’s intent on taking down, she discovers he has a past even darker than hers and she is forced to re-evaluate everything she believes about herself, her job, and what she knows about right and wrong.

Can she face the demons of her upbringing and learn to trust again? Her life will depend on it. 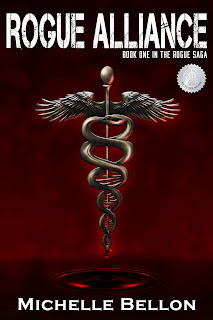 And now we'll hear from Michelle herself!

Q: First of all, let's start with the good stuff. Everyone loves a good publication story. Tell us yours!

A: The long version or the short version? (laughs)

Let’s see…at first, it took me many years of toying with the idea of writing a book before I actually made the decision to take it seriously. Once I did, I realized the only way to get the job done was to take a disciplined approach and commit to writing at little every day.

Six months later I had a finished product. It was a complete mess and needed edited within an inch of its life, but it was a book! Unfortunately, I was clueless about the industry and knew absolutely zero about what it took to publish a novel.

After researching for hours on end and writing query letters until my eyes felt like they would fall out of my head, I began to reach out to agents and publishers. This is when the rejections began and my scope of what I was trying to accomplish became very concrete. I was swimming in a sea of aspiring writers who were taking the flourishing e-book industry by the horns. By this time I was already well into writing my second book and was very excited about ideas for the third. Writing was no longer an option. It was necessary. I loved it.

So, I decided that I not only wanted to write but I wanted to write really well. I read everything I could on the craft of writing. I joined critique groups both online and offline. I went to conferences and took workshops. I immersed myself knowing I had a lot to learn.

The first small press to offer a contract was Fingerpress Publishing out of London. They signed my YA, Embracing You, Embracing Me which won the Pinnacle Book Achievement Award in its category in the summer of 2012. Due to their aggressive schedule they were unable to acquire my other books so I went back to the drawing board and found Old Line Publishing. They contracted to publish my novel, His Salvation, romance suspense, and The Complexity of a Soldier, commercial fiction. I was less than pleased with the way they treated their authors and decided not to pursue further negotiations with them.

For my next book, Rogue Alliance, I searched high and low and found a press out of Ireland. They had a smart approach to marketing so I took the chance although they were brand new. Just a few months after the release date, after a few key promotions, the book began to climb the Amazon ranks rather quickly. Excitement grew as I began to believe all my hard work was about to pay off.

Then I got the call. My publisher had a family emergency and planned to close the business immediately. Rogue Alliance would be pulled from the shelves. I couldn’t believe it!

After only a few hours of feeling despondent and wondering if I should just throw in the towel, an all-encompassing calm came over me and I remember thinking, “Good, now I can find my real home.”

At that moment, I knew that another door would open. I decided that I wouldn’t go searching in earnest for the next publisher. I would remain open and see what came my way.

A few months later, I accidently came across Pandamoon Publishing on Twitter. After doing my research, I wrote the owner, Zara Kramer, a very in-depth email about where I was in my career and where I wanted to go. She emailed me back. Then we had an amazing phone conversation where I discovered her incredible work ethic, professional history, and general outlook. The rest is history. I’m so proud to say I’m a Pandamoon author now.

Q: What was the biggest obstacle you, personally, encountered as a writer?

A: By nature, I’m not a patient person. But as you all know, nothing in this industry happens quickly. There are weeks, months, and even years of waiting as you write, edit, submit, and revise your work. Everything from the query letter submission to the book cover production to the multiple edits, takes time, time and more time. Sigh.

Have I learned patience during this process? Not a chance. But I’ve learned to survive it and even make the most of it.

Q: And the biggest strength you had?

A: My mom told me countless times that I could do anything that I set my mind to. Through this evolution as a writer, I’ve learned how true that really is. I’m relentless. I work myself until I’m exhausted. That’s not always a good thing, but it has been essential to getting to where I am today. I honestly believe that if I just keep my nose to the ground and work harder, learn more, try again, that I really will achieve my goals and dreams. Hopeless dreamer? Maybe, but I don’t understand the purpose of aiming low.

Q: You've listed some illustrious inspiration! As a person with degrees in both literature and creative writing, I love to get all nerdy about specific literary influences. How did each of the authors you listed as inspiration influence your work? Technically? Personally? Inspirationally?


A: I’m consistently inspired by other writers; all of them. While immersing myself in the world of social media, I’ve made connections with countless authors from various genres and degrees of success. Without a doubt, watching them strive, work, fail, try again, and succeed, is the single most inspirational journey. Trying to make a name in this industry is difficult but when you reach out and start networking with others who are in the same boat as you, it can be very motivational. Suddenly the journey isn’t quite so lonely or daunting.

Q: What do you feel readers can most look forward to from your book? What makes it unique?

A: The uniqueness itself is what I believe readers can look forward to. As one reader said, “Bellon has given the vampire theme a whole new twist.” There really is nothing out there quite like it. My goal with this story, well one of them, was to make it a page turner. Every chapter will raise the stakes and have the reader eager to find out what will happen next.

Thank you so much!!! Happy Holiday and thanks for having me.